Once again Montana’s World-Famous Gallatin River is Experiencing a Miles-Long, Green Algal Bloom.  This “New Normal” is not, in fact, Normal. 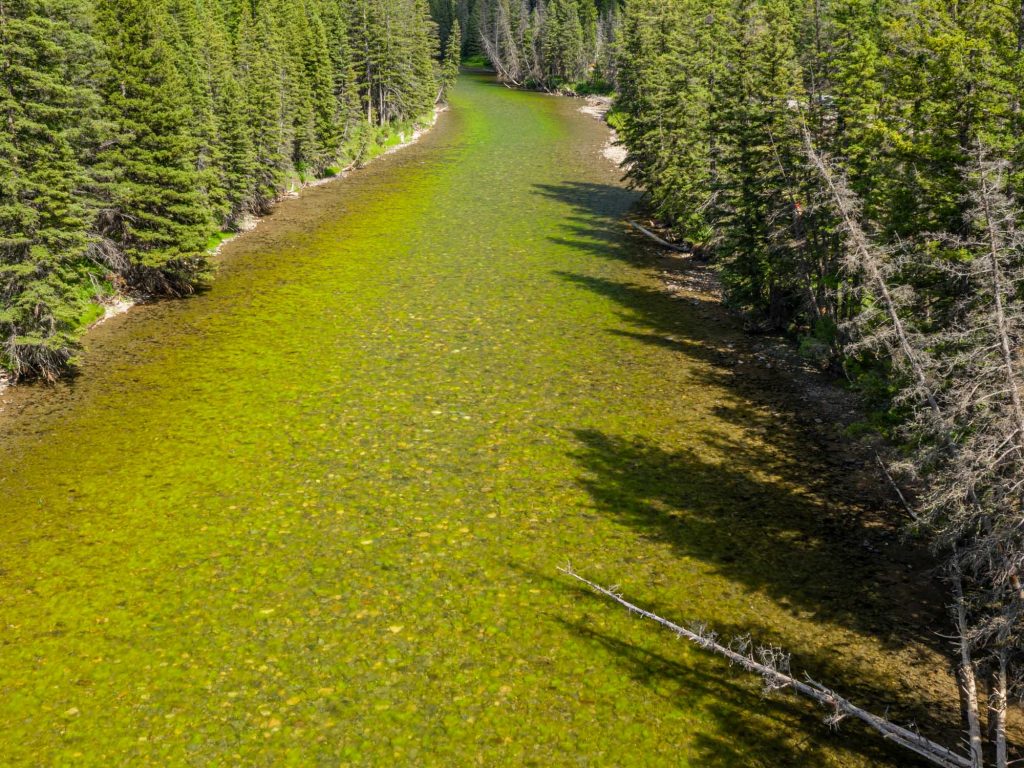 The Gallatin River is a jewel of our state and the treasured community backyard of Big Sky and Bozeman.  The Gallatin generates millions of dollars annually, fueling an active clean water-based economy of real estate, tourism, angling, whitewater, and more.  It is the proverbial main artery of the Custer-Gallatin National Forest which surrounds it, and is home to several blue-ribbon fisheries.

A separate algal bloom of like consistency and appearance also appeared in the Taylor Fork, and like the 2018 algal blooms in the upper Gallatin, appeared directly downstream of the Nine Quarter Circle Ranch and the USFS’ Waipiti Creek restroom but disappeared upon the Taylor Fork’s confluence with the mainstem Gallatin.

Before we continue with more pictures and analysis, let’s do a quick crash-course in nutrient pollution and algal blooms so that we’re on the same page with problem identification.

Algae occurs naturally in most bodies of freshwater.  It’s normally fairly harmless, but the right combination of warm water, high nutrient levels, and adequate sunlight combined can cause an unnatural algae bloom.  These blooms can damage aquatic ecosystems by blocking sunlight and depleting oxygen that other organisms need to survive.  Some algae, like red algae and blue-green algae, can produce toxins that damage the human nervous system and the liver (and they also stink — literally).

Human activity is often the trigger that accelerates algal blooms in freshwater systems by increasing nutrient loading.  Natural sources of nutrients such as phosphorus or nitrogen can be supplemented by a variety of human activities.  For example, in rural areas, agricultural runoff from fields can wash fertilizers into the water.  In urbanized or developing areas with construction, nutrient sources can include treated wastewaters from septic systems and sewage treatment plants, and stormwater runoff that carries pollutants such as lawn fertilizers.

Just as in 2018, Upper Missouri Waterkeeper again reached out to Montana DEQ upon seeing the extent and significance of the Gallatin’s algae blooms in summer 2020.  DEQ’s lead scientists confirmed that the Gallatin’s blooms are not the dangerous, toxic type of algal bloom (cyanobacteria or blue-green algae), but are filamentous in type, commonly occurring when there are imbalances in nutrient loading within a waterway.

Montana scientists know that most ecoregions in our state rely on a delicate balance of nutrients to remain healthy and free from noxious algae.  For example, we know that the Gallatin watershed is volcanic ecoregion with naturally occurring, elevated levels of phosphorus; this means that when it comes to algal blooms the “limiting nutrient” (the chemical whose consistent addition can give rise to noxious algal bloom) is nitrogen.  Montana scientists also know that the water quality criteria – the concentrations of Total Nitrogen and Total Phosphorus which represent natural conditions -necessary to preserving a healthy Gallatin free from noxious algal growth are around .03 – .05 mg/L TP and .3 mg/L TN.

The Gallatin River Task Force has assembled one of the best summaries of local water quality data in the state, including years of data on nutrient loading in the W Fork Gallatin watershed, a primary tributary to the Gallatin and just upstream from the start of algal blooms on the mainstem Gallatin.  Long story short we know the S Fork and the W Fork Gallatin contain unnaturally high levels of manmade nutrients (as high as 3+ mg/L TN according to GRTF data) and in particular nitrogen, and exhibit this unnaturally high nutrient loading each summer season.

Algal blooms are reason for concern even when they are not toxic because enough noxious algal growth can not only be a nuisance for recreation (imagine trying to cast your fly line through, or jump into, a big algae mat), but if prolonged and widespread, algal blooms can start to affect bug life, decrease oxygen concentrations in the river, and create unnaturally warm temperatures, which in turn affect fish populations and aquatic communities.  Less bugs equals less food for fish, less oxygen equals hardship for aquatic species, and warmer water means a tougher environment for our game and native fish populations to thrive.  Most MT trout, for example, don’t like temperatures much above 65 degrees, and 70 degree water and above can statistically decrease fish viability, even if caught and released by an angler.

Coming full circle, three years of investigations on summer algal blooms indicate there’s unnatural and unhealthy nutrient loading occurring in the Gallatin and at least two tributaries, during a hot weather stretch with lots of sunlight, and when seasonal flows are < 750 cfs:  a perfect storm of conditions for inciting widespread algal blooms.  Hot temperatures, sunlight, and water clarity don’t cause algal blooms – nutrient pollution is the causal agent, and it’s disingenuous to suggest the issue is “out of our control.”  As the British say, bollocks.

Nutrient pollution loads the gun: warm temperatures, sunlight and low flows pull the trigger.  We can’t control the weather but we can darn sure control manmade sources of nutrient pollution.

The July-August 2020 Gallatin Algal Blooms represent the third consecutive year of nutrient pollution reaching a tipping point.  Its high time everyone who cares about the Gallatin to stand united in demanding action that stops the root causal problems, before it’s too late.

During summer 2020 Upper Missouri Waterkeeper performed 6x weeks of intensive river surveys to document the size, scope, and severity of this year’s algal bloom.  Here’s what we found.

Beginning in the third week of July 2020 we found a growing filamentous algal bloom creeping along the bottom river substrate directly downstream of the W Fork confluence. 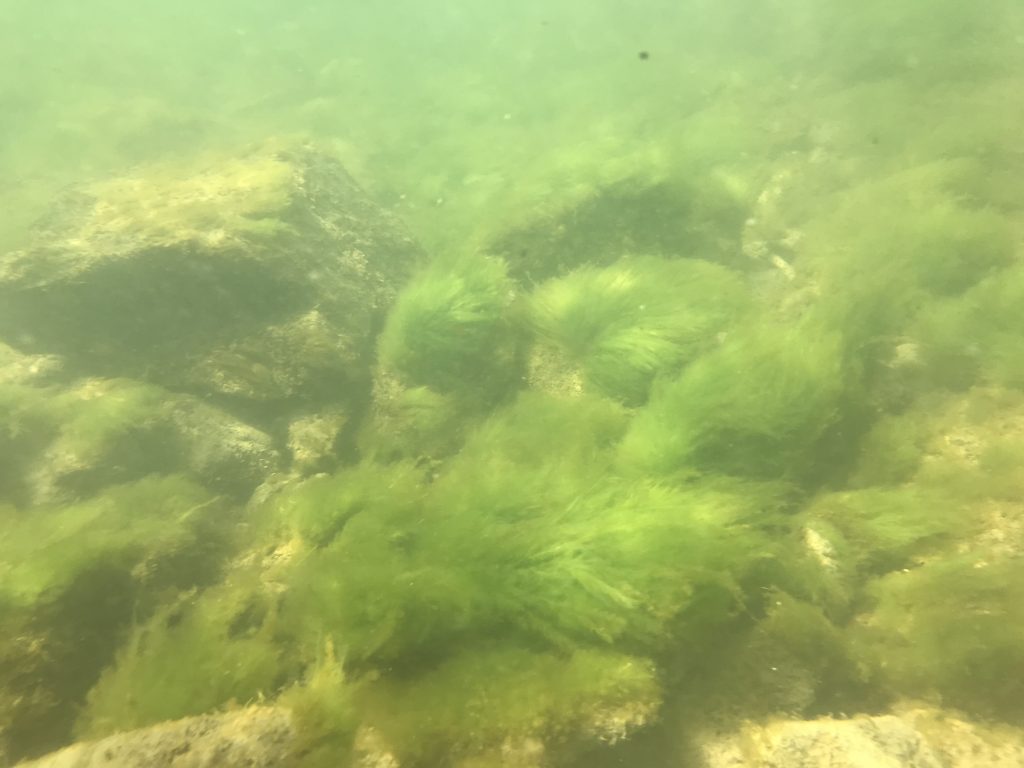 The first week of surveying found the algal bloom covering over 50% of the main channel substrate from the W Fork confluence downstream approximately 6 miles.  Notice how thick and consistent the algal growth is along the Gallatin’s bottom cobbles: this type of severe algal growth is exactly what can disrupt macroinvertebrate communities, and given low enough flows and hot temps affect dissolved oxygen levels instream, all of which degrade aquatic habitat and impact fisheries and water quality.

By the first week of August the bloom had grown in scope and severity to cover more than 75% of the main river bottom. 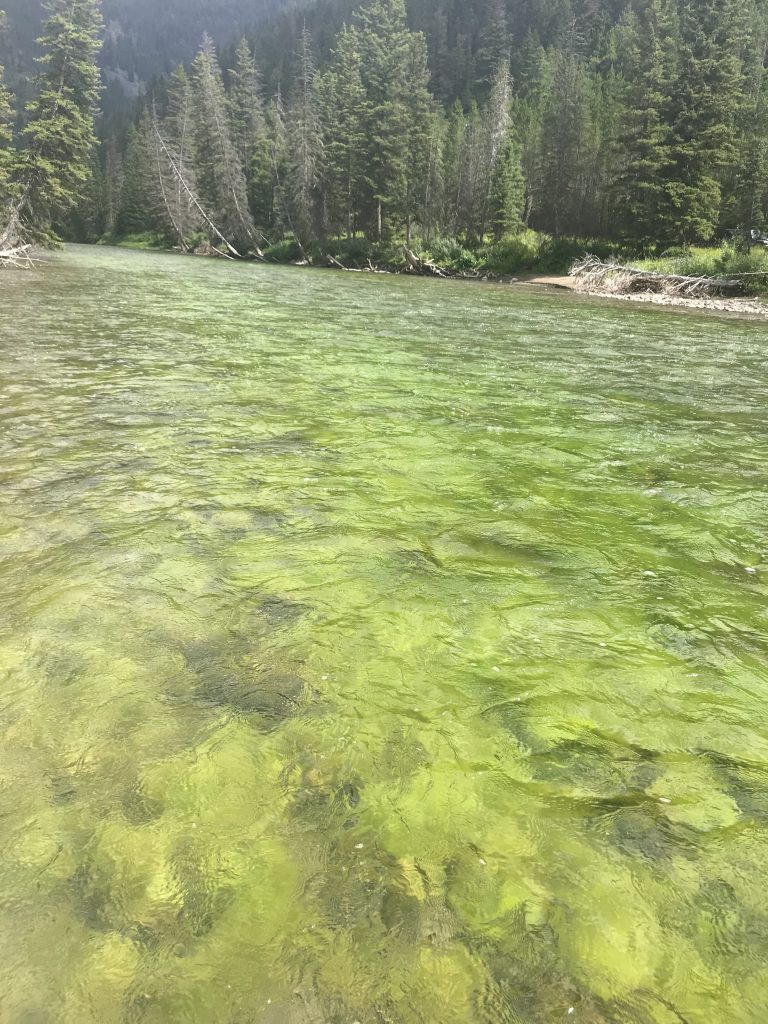 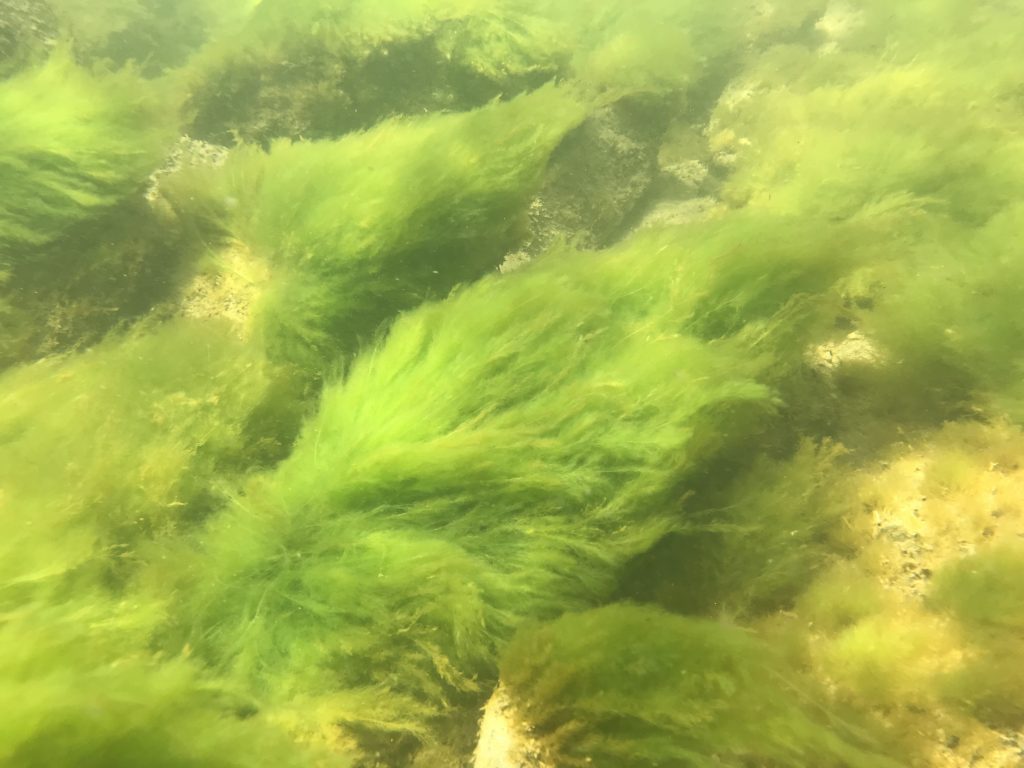 By the end of August the bloom was consistently visible downstream from the W Fork to Moose Cr., nearly 10 miles.

Waterkeeper was able to get out for drone footage documenting this year’s algal bloom in early August; take a peek at the condition of Powerline Alley, a local’s favorite fishing stretch:

3 Consecutive Years of Algal Blooms in the Gallatin: What Does it Mean?

Three consecutive annual algal blooms on the mainstem Gallatin River below the W Fork means it is time to talk seriously about setting a pollution diet, AKA a “Total Maximum Daily Load” or TMDL, for this stretch of the river.

A TMDL is a term of art from the federal Clean Water Act, our Nation’s hallmark water pollution control law.  It is the literal calculation of the maximum amount of a pollutant(s) a waterway can accept and still meet a State’s Water Quality Standards for public and ecosystem health.

The federal Clean Water Act requires states – like Montana – to use best available science to identify waterways that are not meeting Water Quality Standards and develop TMDLs for those waterways as roadmaps to reducing pollutants and restoring good river health.

Montana set Water Quality Standards on the Gallatin for a variety of uses ranging from the sensitive aquatic life use (e.g., requiring healthy water conditions capable of supporting natural aquatic communities like trout and macro invertebrates) to the lesser quality protections for irrigation or stock water downstream.  Clean water is vital to human and wildlife health, recreation, and our outdoors based economy in Montana, and TMDLs are a critical step in ensuring that degraded waters are restored and protected so that all citizens can enjoy a clean and healthy environment.

Three years of data showing severe, unnatural algal blooms is proof positive that too many pollutants traceable to man-made sources – in this case nitrogen and phosphorus – are entering the Gallatin, and in turn the law proscribes a proven regulatory process for controlling and reducing those sources of pollution and restoring the Gallatin to health.  While sunlight and seasonal low flows do play a role in spurring unnatural algal blooms, these pollution events do not occur without the unnaturally elevated concentrations of nitrogen and phosphorus.  In Montana and on this stretch of the Gallatin we cannot control the weather or seasonal flows, but we sure can make an impact controlling man-made sources of nutrients by developing a pollution diet for the mainstem Gallatin River.

Coming full circle, there can no longer be any reasonable debate about the need to be proactive in addressing the threat of nutrient pollution to the Gallatin River: every continued year of algal blooms creates worse river health threatening bug life, our trophy trout populations, recreational use, and the countless businesses and jobs that depend on a healthy Gallatin.  Over the next two years we will be working to ensure the Montana Dept. of Environmental Quality initiates the pollution-control planning process required by the Clean Water Act, creating a transparent accountability framework for ratcheting down man-made sources of nutrient pollution that threaten the Gallatin River.  It is time for everyone who says they care for the Gallatin to put sentiment to action and stand united in requesting a pollution diet for the Gallatin.  Stay tuned and join our mailing list so you never miss an opportunity to use your voice to protect the future of the Gallatin River.