From the Missouri’s utmost source, that tributary river flows 298 miles through mountain valleys of southwestern Montana. Along the way it merges with numerous headwater rivers: the Red Rock River, the Beaverhead, the Big Hole and then the Jefferson, where it arrives in Three Forks and Headwaters State Park. There, it finally merges with the Madison and the Gallatin, the “official” start of the Missouri River. Fittingly, the breadth of these three primary riversheds is called the Missouri Headwaters subbasin. 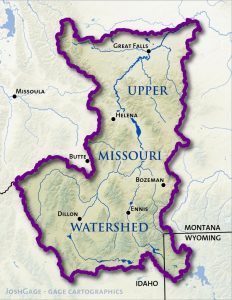 Thus, the Upper Missouri River Basin of Montana encompasses the first two subbasins of the Missouri River: the Missouri Headwaters and the Missouri-Sun-Smith sub-basins. Together these subbasins drain the approximately 24,749 square miles of southwestern Montana’s Northern Rocky Mountain landscapes.

The Upper Missouri River Basin of Southwest and West-Central Montana is distinct from other watersheds by virtue of its geography and land use traditions. Northern Rocky Mountain landscapes are made up of broad valleys with prairie habitats of grasslands, sagebrush, and wooded riparian areas rising to foothills and mountains as high as 11,500 feet in elevation. Most lowlands are privately owned, while most of the higher elevations are federally owned by the United States Forest Service (USFS) or the Bureau of Land Management (BLM).

In fact, public lands comprise approximately 9,300 square miles – roughly 40% – of the Upper Missouri River Basin. The theme of privately owned and developed lowland tracts and publicly-owned headwater/mountain tracts provides a geographic framework for the Basin, as well as a good primer for understanding the unique challenges and opportunities in water resources management for the Basin.