The Gallatin River is experiencing a large, miles-long neon-green algal bloom for the first time in recent memory. 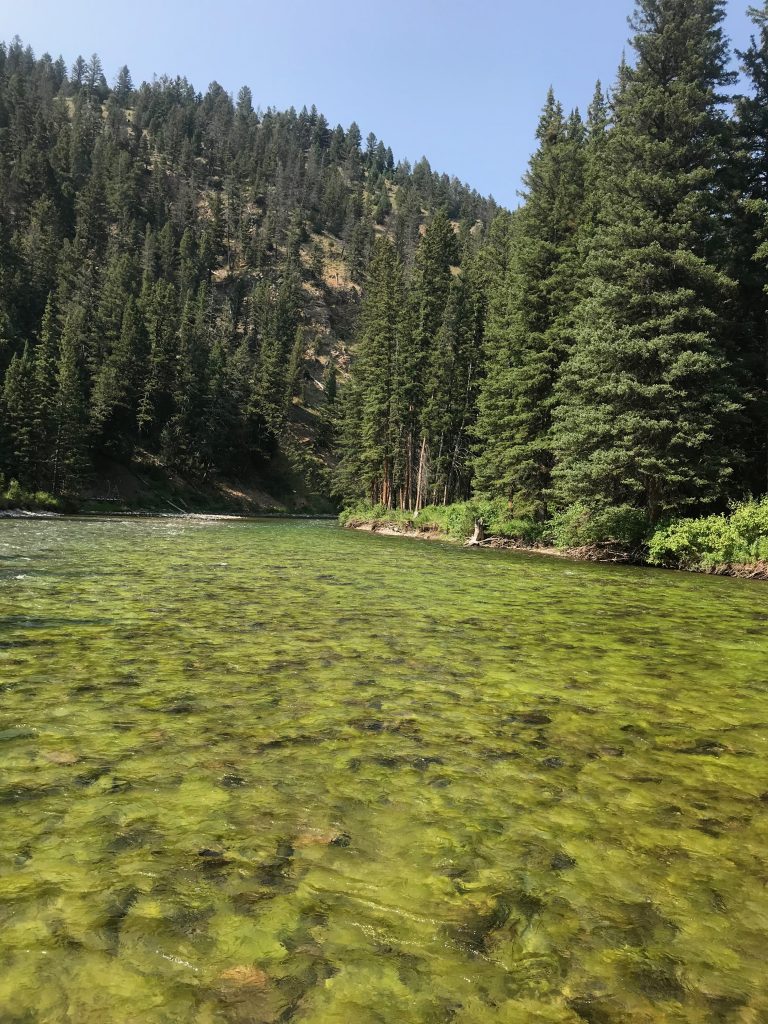 Waterkeeper first became aware of the emerging algal bloom on the Gallatin late July 2018.  A few members shared initial video and photographs from different locations, all south of the W Fork confluence at Big Sky, mostly within the Canyon stretch of the river. 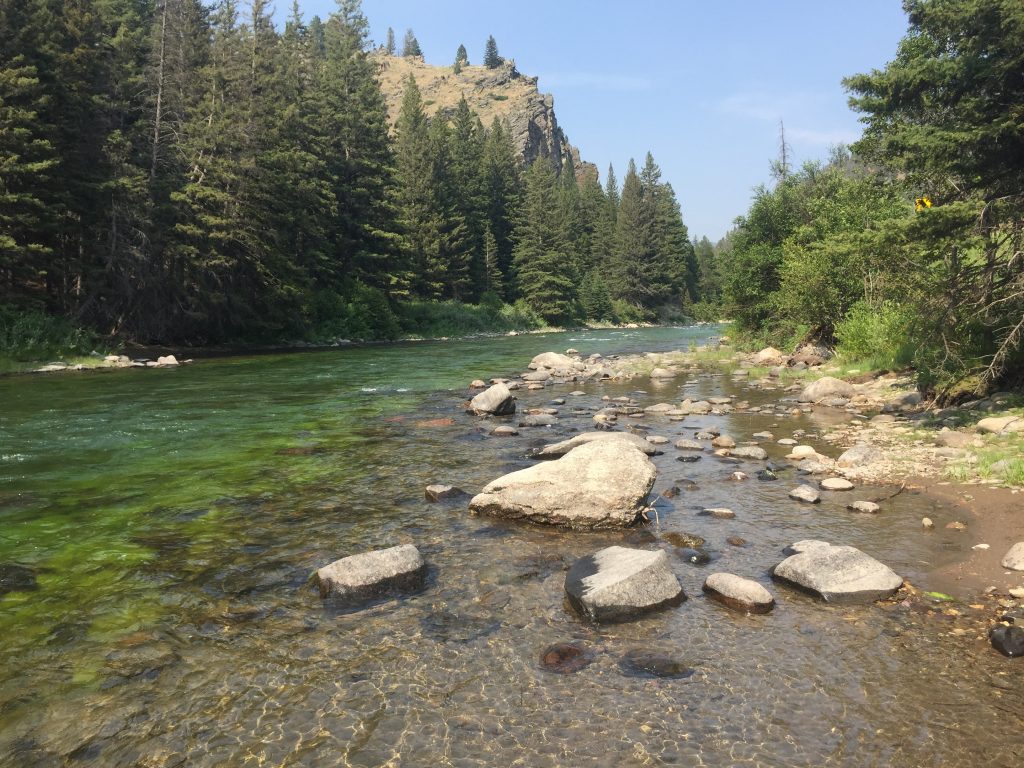 Here’s a look at the algae bloom farther downstream near Williams Bridge on August 4, 2018, very similar to the Canyon conditions:

Algae occurs naturally in most bodies of freshwater.  It’s normally fairly harmless, but the right combination of warm water, high nutrient levels, and adequate sunlight combined can cause a unnatural algae bloom.  These blooms can damage aquatic ecosystems by blocking sunlight and depleting oxygen that other organisms need to survive.  Some algae, like red algae and blue-green algae, can produce toxins that damage the human nervous system and the liver (and they also stink — literally).

Human activity often triggers or accelerates algal blooms in freshwater systems by increasing nutrient loading.  Natural sources of nutrients such as phosphorus or nitrogen can be supplemented by a variety of human activities.  For example, in rural areas, agricultural runoff from fields can wash fertilizers into the water.  In urbanized or developed areas, nutrient sources can include treated wastewaters from septic systems and sewage treatment plants, and urban stormwater runoff that carries pollutants such as lawn fertilizers.

Upper Missouri Waterkeeper reached out to Montana DEQ and the EPA regional office in Helena immediately upon seeing the extent and significance of the Gallatin’s August 2018 algae blooms.  DEQ’s lead nutrient scientist confirmed that the Gallatin’s blooms are not the dangerous, toxic type of algal bloom (cyanobacteria or blue-green algae), but are filamentous in type, commonly occurring when there are imbalances in nutrient loading within a waterway.

Montana scientists know that most ecoregions in the state rely on a delicate balance of nutrients to remain healthy and free from noxious algae.  For example, we know that the Gallatin watershed is volcanic ecoregion with naturally occurring, elevated levels of phosphorus; this means that when it comes to algal blooms the “limiting nutrient” (the chemical whose consistent addition can give rise to noxious algal bloom) is nitrogen.  Montana scientists at DEQ also know that the water quality criteria – the concentrations of Total Nitrogen and Total Phosphorus which represent natural conditions -necessary to preserving a healthy Gallatin free from noxious algal growth are around .03 – .05 mg/L TP and .3 mg/L TN. 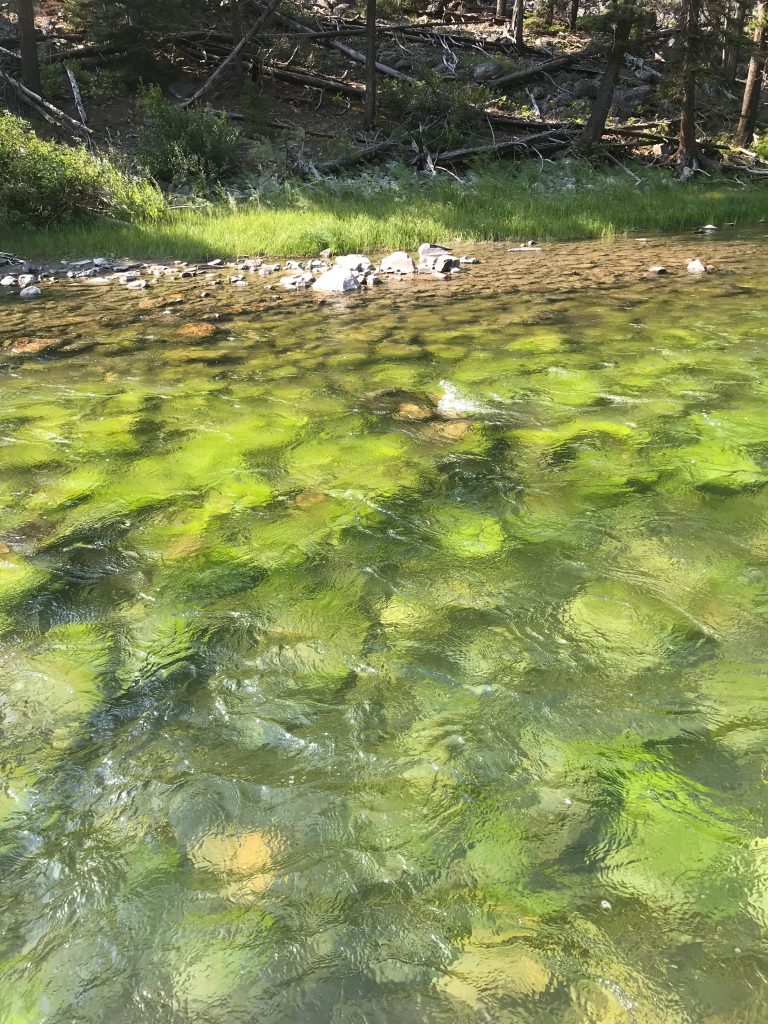 The Gallatin River Task Force has assembled one of the best summaries of water quality data in the state, including years of data on nutrient loading in the W Fork Gallatin watershed.  Long story short we know the S Fork and the W Fork have contained unnaturally high levels of nutrients (as high as 3+ mg/L TN according to GRTF data) and in particular nitrogen, and exhibit this unnaturally high nutrient loading each summer season.  As one starting point ambient concentrations of nitrogen and ammonia in the W Fork downstream from the Meadow and S Fork downstream from Spanish Peaks will be important data sets.

Coming full circle, initial investigations indicate there’s unnatural nutrient loading occurring in the Gallatin and at least two tributaries, during a hot weather stretch with lots of sunlight, and when seasonal flows are < 750 cfs: a perfect storm of conditions for likely creating the widespread algal blooms July/August 2018.

Algal blooms are reason for concern even when they are not toxic because enough noxious algal growth can not only be a nuisance for recreation (imagine trying to cast your fly line through, or jump into, a big algae mat), but if prolonged and widespread, algal blooms can start to affect bug life and create unnaturally warm temperatures, which in turn will both affect fish populations.  Less bugs equals less food for fish, and warmer water temperatures mean harder for our game and native fish populations to thrive.  Most MT trout, for example, don’t like temperatures much above 65 degrees, and 70 degree water and above can statistically decrease fish viability, even if caught by an angler and released.

Big picture summary of summer 2018 algal blooms: there’s a problem on the Gallatin, and its time to dig-in and find real solutions, before the picture get’s any worse.

We wanted to document the extent, significance, and characteristics of the Gallatin’s algal bloom this August, so we did a 7 mile pollution patrol float on August 10, 2018.  Here’s what we found…

Everyone who loves the Gallatin is asking the same questions – “what’s causing this algal bloom, and what can we do about it?”

At this time the only clear answer is that the Gallatin’s delicate chemical balance is upset, and warm weather plus imbalanced nutrient loading is likely to blame*  The asterisk, however, means that it’s premature to lay blame at any doorstep, because this is the time and place for science to guide any type of finger-pointing.

First and foremost, water quality samples and video and photo documentation needs to be taken from algal bloom areas to characterize the ambient concentrations of nitrogen and phosphorus (aka, plant food), and the consistency, severity, and scope of the algal bloom.  This documentation also need to be representative of the areas experiencing algal blooms, and then cross-referenced with historical data to determine the precise elements causing this August’s algal blooms, and likely sources.

Second, there are numerous reports of another algal bloom occurring in Taylor Fork, several miles upstream of Big Sky.  This bloom needs to also be documented in terms of location and significance, and sampled to determine pollutants at issue.  The bloom in Taylor Fork is interesting from a scientific perspective as the mainstem Gallatin downstream from Taylor Fork to the confluence of the W Fork doesn’t exhibit the same type of overwhelming, noxious neon-green algal growth. Neither do Porcupine Creek or streams entering the Gallatin from the Turner Ranch.  This could mean nutrient loading and key bloom-causing factors are prevalent in certain locations due to localized sources of nutrient loading and become diluted once farther downstream depending on unnatural nutrient loading concentrations and streamflow.

A big Gallatin River algal bloom doesn’t mean the sky is falling, but it does mean that steps need to be taken to determine causes and sources of pollution, and once identified, solutions need to be implemented to ensure the river is protected from future, worse outbreaks.

As any aquatic science book will tell you, big noxious algal blooms are indicators of unhealthy imbalances in a waterway.  The Gallatin and all the businesses, families, and communities it supports are lucky in that the algal blooms we’re seeing summer 2018 are short-term and non-toxic in nature.  However, without scientific research seeking out causes of this year’s algal bloom, and proactive steps taken to address proven pollution sources, we run the risk of the Gallatin not only experiencing algal blooms every year, but of conditions worsening and nasty consequences emerging for the river and people it supports.

Everyone who loves SW Montana and our rivers should be unified in pushing for science-based answers to this summer’s algal bloom and holding our decisionmakers – at the local, county, and state levels – accountable to make protecting a healthy, clean Gallatin River a top priority.