Recurring benthic algal blooms can degrade recreational experiences and negatively affect fish populations and aquatic communities. Prolonged and widespread algal blooms have the potential to cause serious harm to the physical, chemical, and biological integrity of the Gallatin River, the consequences of which could impact Gallatin County’s outdoor economy, drinking water supplies, ranching and agriculture, and wildlife and trophy fish.

The Gallatin’s algal blooms are 100% preventable, if state agencies and local governments are willing to step up to protect it. In fact, the state has the ability to limit human-based contributions of nutrient pollution (nitrogen and phosphorus) that cause such algal blooms by ratcheting down terms and conditions of wastewater discharge permits, septic authorizations, and better stormwater control in development projects. Requiring better treatment or new projects to hook up to centralized facilities, prohibiting development in sensitive regions hydrologically connected to the river, and mandating low impact development would significantly reduce nutrient pollution entering the upper Gallatin and the likelihood of severe algal blooms.

The tools are in DEQ’s tool belt to address the problem of nutrient pollution, they simply lack the political will to do so. The science clearly indicates that after four consecutive years of algal blooms, the Gallatin is ‘impaired’ from the cumulative impacts of wastewater, and should be officially designated as such by the Department of Environmental Quality (DEQ) with a mandatory clean up plan. It’s time to take action, before it’s too late. 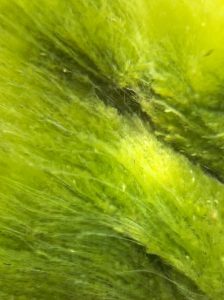 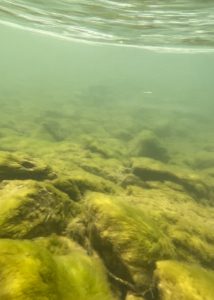 Unfortunately, DEQ is failing to protect the public trust and continues approving wastewater pollution permits that are cumulatively degrading the Gallatin River. As enormous new Big Sky development projects are proposed and Gallatin County continues to experience exponential growth, DEQ must formally recognize the Gallatin downstream of Big Sky as degraded by nutrient pollution and initiate the pollution-control process required under the federal Clean Water Act by implementing a Total Maximum Daily Load (TMDL) to reduce nutrient pollution and restore the river’s health.

Upper Missouri Waterkeeper is continuing to track and oppose pollution permits that would degrade the Gallatin River, and is working to ensure DEQ initiates the TMDL process for ratcheting down on nutrient pollution that continues to threaten the health of the Gallatin River.