DEQ recently proposed a new pollution permit that would allow up to 20,000 gpd of poorly treated wastewater from new development in Big Sky’s Canyon Area, despite the fact that local groundwater and the Gallatin River are experiencing nutrient degradation and severe algal blooms.

Known as Lazy J South and representing a continuation of the subdivisions and commercial growth in Big Sky’s Canyon Area from nearly 20 years ago, the proposed pollution permit would serve 70 to-be-built lots, 32 lots being high-end residential located upland to the west and 38 industrial/commercial lots closer to Hwy 191.  Residential lots would be expansive, averaging 5 ac in size, sprawled across the upland hills overlooking the Canyon.

As many familiar with Big Sky’s Canyon history know, new construction has come in fits, inconsistently, over the last two decades due to economic rollercoasters and water supply and waste disposal issues.  With CV-19 pandemic and tourism at an all-time high in Big Sky, there’s obvious economic interest in the build-out of Lazy J South.

It is important to note that Lazy J South represents a significant new source of sewage pollution to local water resources.  In DEQ’s own words – the state agency responsible for ensuring wastewater pollution from new development does not unlawfully harm local water quality – this pollution permit is effective for new development because “there is very little built and discharging…[sewage] flow is averaging 138 gpd for a system designed to handle 11,672 gpd [and a maximum of 20,000 gpd].”

Anyone who cares about local water quality and the long-term health of the Gallatin River should understand several serious concerns about Lazy J South’s pollution permit.  Let’s walk through the issues.

First.  Poor Sewage Treatment.  Lazy J South is attempting to use an old septic system  – a Level 2 treatment system – which is not best available treatment technology and was originally built, but not used, in 2006.  Level 2 septics are 1990s technology incapable of treating typical residential wastes – let alone the more concentrated wastes from commercial or industrial uses – to a quality sufficient to protect sensitive water resources in the Upper Gallatin.  The Gallatin County Health Department and Gallatin Local Water Quality District, two non-partisan expert agencies, have long documented that the proliferation of poor septic systems associated with sprawl development is part of the reason why nutrient levels are rising in the Gallatin watershed, and are likely part of the problem causing recurrent severe algal blooms in the mainstem Gallatin.

Second.  Significant Volumes of New Pollution.  The scale of Lazy J South’s effectively new wastewater pollution is alarming.  A recent technical review of wastewater issues in Big Sky’s Canyon Area illustrates the key contextual fact that the proposed Lazy J South discharge is significant in terms of volume and level of treatment when compared to other existing Canyon wastewater discharges.  Lazy J South would have an average daily discharge design of approximately 11,672 gpd with a maximum of 20,000 gpd.  This volume would place it among the largest existing wastewater systems in the Canyon (wastewater systems averaging 10,000-20,000 gpd), systems that are already causing or contributing to unnaturally elevated and concerning levels of nitrate in groundwater, and to nutrient loading to the Gallatin River, which is suffering unprecedented noxious algal blooms downstream of the Canyon and W Fork confluence. 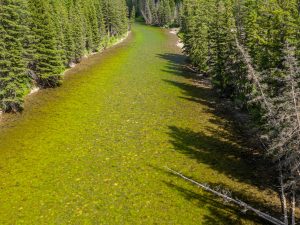 Third.  Efforts are Underway to Remove – Not Add – Septics in Big Sky’s Canyon Area. Because science has long indicated that septics do not offer adequate protection of local water resources, and because most stakeholders recognize the need to address emerging nutrient pollution levels in local drinking water sources in the Canyon, there’s a growing consensus that this region should focus on improved treatment.  In December 2020, Gallatin County authorized the creation of a new water and sewer district in Big Sky’s Canyon Area for just this reason: to allow a quasi-governmental body to leverage public and private funding towards improved wastewater treatment for the Canyon.

An interlocal agreement between the Big Sky Resort Tax Board, the Big Sky Water and Sewer District, and the Canyon Sewer District contemplates new infrastructure and collection systems capable of taking most of the Canyon’s largest existing septics offline and sending that wastewater to the Big Sky Water and Sewer District’s imminent new WasteWater Treatment Facility (being built 2022) in the Meadow.  It is therefore concerning from an economic efficiency perspective, let alone an environmental health perspective, that DEQ would consider authorizing a developer to use a big septic system when most community momentum is headed the opposite direction, towards better sewage treatment.

Fourth.  Emerging Science Shows Canyon Groundwater Is Connected to the Gallatin River. As far back as 2005, expert scientists were documenting hydrologic connectivity between streams, rivers, and groundwater in the Upper Gallatin.  Recent years of significant new development within larger Big Sky has put an increased strain on water resources which, with water quality sampling showing increasing nutrient pollution levels, has raised concerns across the board about how development and waste disposal throughout Big Sky is causing or contributing to severe seasonal algal blooms in the mainstem Gallatin downstream.  To answer many of these questions Montana’s expert water resource agency, the Montana Bureau of Mines and Geology, is finishing up a 3-year in-depth study of local water resources in Big Sky’s Canyon Area.

Interested in reading the specifics?  Read our technical comments to DEQ here.

It is becoming abundantly clear that the mainstem Gallatin’s recurrent summer algal blooms represent a tipping point, indicating the river system as a whole is experiencing too much nutrient pollution.  In the Upper Gallatin River, algal blooms do not occur but for unnatural nutrient levels. Put another way, nutrient pollution loads the gun, but hot temperatures and water clarity (in summer) pull the trigger causing noxious algal blooms.  When a waterway experiences severe algal blooms that degrade water quality, affect aquatic life, and interfere with recreational use, federal and state law requires that waterway be listed as impaired on the State’s biannual 303d List of Impaired Waterways and a pollution diet prepared.

The Lazy J South pollution permit is a case-study in how our decisionmakers need to consider the cumulative impacts of each new development in the Upper Gallatin and let science – not expediency or profit margins – control how, when, and where we develop land.  It is wildly irresponsible for DEQ to consider allowing more, poorly treated pollution when local ground and surface water is already being degraded by the same pollutants of concern.  Let’s hit pause on Lazy J South and other new development projects and first focus on using a proven, science-based pollution diet process to restore the Gallatin to health, then consider on a case-by-case basis how and where new development can occur.

The Gallatin River deserves better than being a pawn in a zero sum game where new development is guaranteed despite negative impacts on local water quality, fisheries, and local outdoors-based business.