Guy approaches the work of safeguarding water through the perspectives of an attorney, farmer, father, activist, and outdoorsman. Forever influenced by his upbringing on a rural family farm, Guy has an unquenchable thirst for unique landscapes and environmental justice.

Guy lives in Bozeman with his wife Morgan and their son Gus and daughter Aveline. He enjoys kayaking and climbing in the Gallatin, fishing the Big Hole, exploring Montana’s wildlands, tinkering in his shop, and skiing the Cold Smoke.  He has served on the Board of Directors for Gallatin Valley Farm to School as well as the City of Bozeman’s Planning Board and Wetlands Review Board where he puts to action his belief in civic duty.

Guy holds a B.A. in Political Science from Pepperdine University (2006), an M.S. in Environmental Policy, and a J.D. from Vermont Law School (2009), and is a member in good standing with the State Bar of Montana and the Federal District of Montana.

Wade is a fifth-generation Montanan deeply rooted in river recreation and ranching in the Upper Missouri Basin. In the late 1800’s his family pioneered and continues to operate one of the first cattle ranches in Southwestern Montana on the headwaters of the Big Hole, and in 1984 his father founded one of the West’s first destination fly fishing lodges where Wade has guided for nearly a decade. Wade’s deep conservation ethic stems from the same sources of clean, readily available water that attracted his ancestors, and later led him to study environmental and water law at the University of Montana. By combining his roots in ranching and fishing with an expertise in water conservation, Wade strives to preserve and protect the natural resources that make Montana the Treasure State, while respecting its traditions and communities that have lived on and with the land and rivers for the past century. Wade lives in Wise River and can be found in the Bridger, Pioneer, Gallatin, or Tobacco Root ranges on deep powder days. He spends his summers co-managing the Big Hole Lodge with his father.

Wade holds a B.A. in Business Management from Bucknell University, fulfilled degree requirements for a major in Philosophy, and a J.D. from University of Montana School of Law. 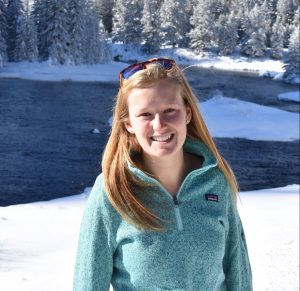 Quincey joins the Upper Missouri Waterkeeper team with a passion for protecting Montana’s headwaters and blue-ribbon trout streams. She brings experience working in outreach for non-profit conservation in SW Montana with the Madison River Foundation, Wildlife Conservation Society, and Big Sky Watershed Corps. As a former Research Technician, Quincey especially enjoys working in the realm between science and advocacy, and using data to build grassroots support and drive action.

Quincey lives in Ennis with her husband and huskies where she enjoys skiing, hiking, and fishing the public lands of Montana.

Quincey holds a B.A. in Environmental Studies from Hobart and William Smith Colleges.