When it rains or snows, runoff from roads, commercial and industrial spaces, and housing development frequently washes harmful pollutants into nearby rivers, streams, and lakes because their surfaces are impervious, meaning water cannot pass through them. Rain that falls on impervious surfaces is not able to soak into the ground as it would naturally, and instead, makes its way into local water bodies, carrying with it any harmful substances that may be present on the surface.

Anything on the ground can end up in the nearest waterway. The most common pollutants flowing into our waterways include dirt, oil, grease, toxic chemicals, heavy metals, road salts and sands, nitrogen and phosphorus, pathogens, and trash. Many of these pollutants fall to the ground as a result of ordinary activities, such as brake pad wear contributing copper and zinc which are toxic to aquatic life. Wintertime salting and sanding deposits chloride, sodium, sand and calcium, and fertilizers on green spaces during the warmer seasons all flush down stormwater drains. 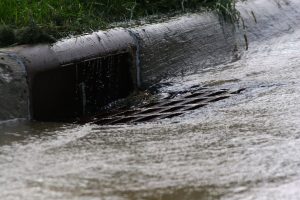 Runoff pollution is significant because unlike the water that goes down a sink or toilet in your home, stormwater is untreated and flows directly to a waterway, river, or wetland.

Concentrations of pollutants in runoff often exceed numeric water quality limits that are designed to protect the health of local waterways.  For water bodies and their aquatic ecosystems, the consequences can be severe.  The effects of pollutants commonly found in roadway runoff include:

In addition to the harmful effects of pollutants added to waterways, stormwater can also cause excessive stream bank erosion due to the sheer volumes of runoff. It does not take much impervious road surface to create massive quantities of runoff: one inch of rain that falls on one mile of a narrow two-lane road produces 55,000 gallons of stormwater. Excessive erosion caused by these high volumes leads to a disproportionate sediment supply in waterways, stream channel instability, land loss, habitat loss, and many other negative effects.

When clean water and aquatic ecosystems are harmed by stormwater runoff, our communities suffer economic and social costs. Polluted stormwater can cause costly health problems for people and wildlife who get sick after coming into contact with it, decrease profits for businesses and affect individuals and land owners that depend on healthy water bodies. When a river system is damaged and fish populations plummet, outfitters and fishing-based businesses – a leading contributor of Gallatin County’s and the state’s $7.1 billion outdoor economy – suffer.  Stormwater runoff can also lead to flood–related property damage, which is estimated to cost $2 billion nationally every year.

When runoff carries pollutants into water bodies that are used as drinking water sources, purification and treatment costs for municipalities can increase substantially. Water pollution also poses a major threat to healthy and diverse aquatic communities that provide humans with free “ecosystem services” such as drinking and irrigation water, fish for consumption, and recreational activities. Wetlands naturally filter pollution, store water supplies, and provide protection against flooding. Healthy, functioning wetlands are valued between $129,000 and $292,000 per acre. Conserving aquatic health and biodiversity delivers an economic benefit to people. Biodiversity and associated ecosystem services decline when roads and developed areas generate polluted runoff and excess stormwater volumes, imposing costs on communities when they must replicate nature’s services artificially.

It’s no secret that Gallatin County is bursting at the seams with unprecedented, prolific growth that is contributing significantly more polluted stormwater runoff to our waterways. An estimated 50,000 residents were added to Gallatin County between 1990 and 2016, 75% of which occurred in the last 15 years. Not only are large swaths of people moving to the county, but development is at an all time high. Since 1990, 15% of all houses built in Montana were located in Gallatin County, and from 1990-2016, Gallatin County experienced a 150% increase in single-family homes. The City of Bozeman has consistently ranked as one of the nation’s fastest growing micropolitan regions, with population increasing by nearly 20% in the past five years. 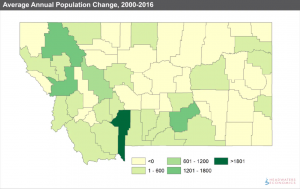 Both state and federal law require pollution permits for stormwater discharges that degrade local waterway health. When these rules were adopted over 20 years ago, Montana identified its then-existing large cities and populous counties and required these entities to work on controlling stormwater pollution to protect local water quality, but since then no one has taken a second look at whether Montana’s new boom towns and associated counties, like Gallatin, need to adopt new plans and policies that address stormwater pollution from prolific new development.

Being proactive in identifying high-growth regions and ensuring they develop plans and rules for controlling development’s negative impacts on local waterway health is exactly what Upper Missouri Waterkeeper (UMW) is doing in Gallatin County.

On June 29, 2021 UMW filed a first-of-its-kind legal petition with the Montana Department of Environmental Quality to prompt the designation of Gallatin County as a stormwater pollution control entity (a non-traditional Municipal Separate Storm Sewer System, MS4, permittee).  Designating Gallatin County as a MS4 permittee – like Cascade County around Great Falls, Missoula County around Missoula, and Yellowstone County around Billings – will provide both a guarantee and new regulatory tools allowing Gallatin County to begin thoughtfully addressing the adverse water quality impacts that new population pressure and development is causing from Big Sky, to Four Corners, to right outside Bozeman.

In conjunction with tens of millions of dollars in new federal American Rescue Plan Act (ARPA) funding dedicated to infrastructure improvement becoming available to Montana counties and municipalities this summer 2021, there has never been a better time for Gallatin County to rise to the occasion and begin prioritizing the protection of clean water and healthy waterways as the region’s unprecedented development boom continues apace.