On May 22, 2018 the public learned what’s causing nearly annual algal blooms and cloudy waters in the Beaverhead River.

Expert scientists from the Bureau of Reclamation, Montana DEQ, and Montana FWP discussed recent late summer algal blooms & water clarity pollution events in Clark Canyon Reservoir and the downstream Beaverhead River and what the future holds for this river, fishery, and the businesses it supports.

For three years in a row (2015 – 2017) the Beaverhead River has dramatically changed come late summer; normally gin-clear water becomes markedly cloudy and banks and back eddies are covered in intense algal blooms, including the appearance of toxic blue-green algae above and below Clark Canyon Dam. 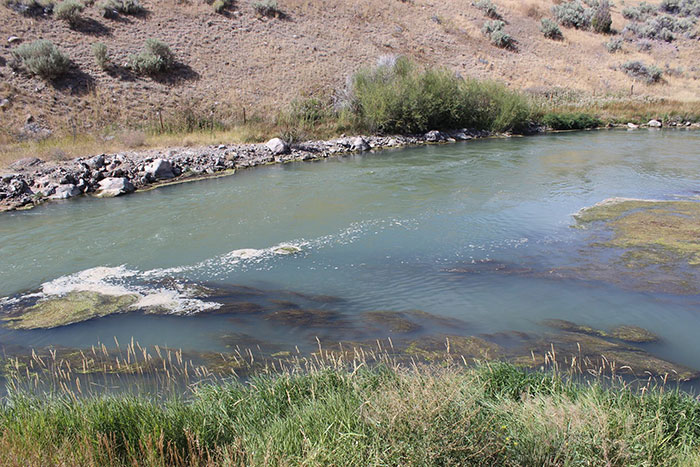 A number of local conservation organizations, including Upper Missouri Waterkeeper, have requested state and federal natural resources agencies take a hard look at the Beaverhead’s and Clark Canyon Reservoir’s water quality challenges.  In response, state and federal agencies studied summer pollution events in Clark Canyon Reservoir and the Beaverhead for the past three years (2015-2017) examining:

First, expert scientists explained how, with the use of sonar and records, the Bureau of Recl. is able to show that the turbidity events are not caused by an abnormal amount of sediment trapped behind Clark Canyon Dam.  Essentially Clark Canyon Dam’s bottom today is within a few meters of the bottom that was present at the dam’s creation.

Second, Bureau of Recl. scientists explained how they used chemical and physical analyses of sediment and water quality in Clark Canyon (both suspended and unsuspended) in conjunction with sonar tracking to conclude that “reservoir stratification events” are the chief culprit of yearly pollution events in the downstream Beaverhead. 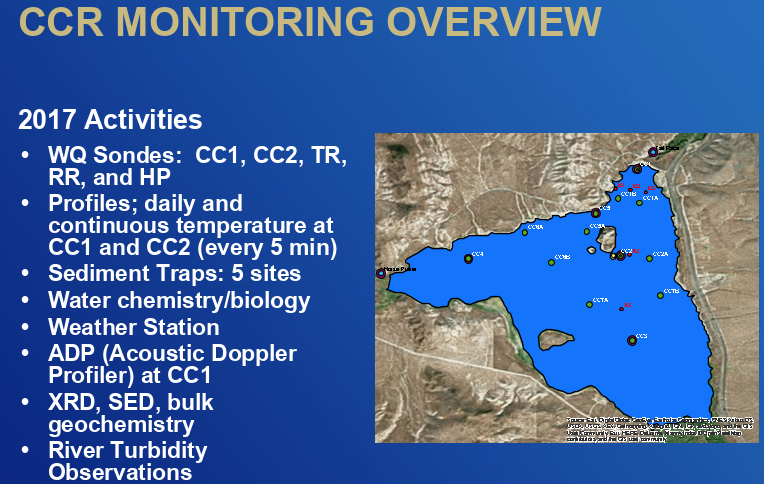 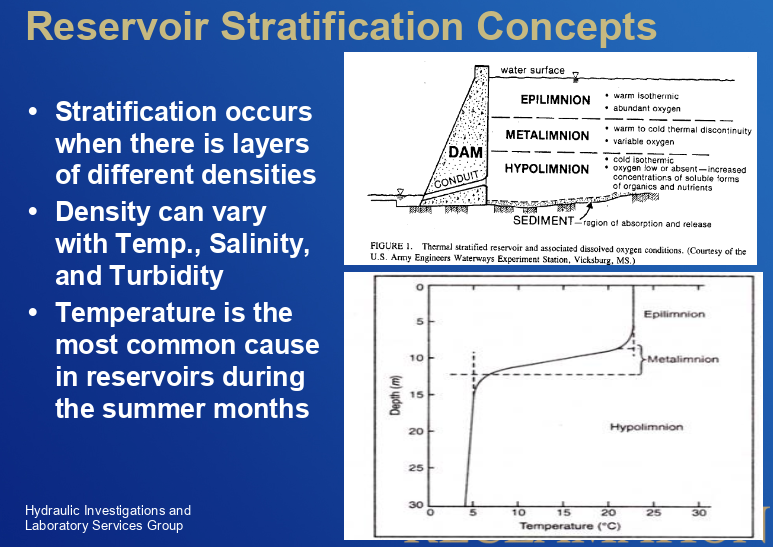 In lakes and reservoirs stratification essentially represents a destabilization of otherwise separate “columns” of water that behave differently and can have different chemical compositions. Leading factors contributing to water column stability include (1) temperature gradient of water, i.e., its density, (2) wind stress (how hard its blowing…), and (3) inflow/outflow stress, which is to say the rate of water column mixing.

As many folks know, wind fetch can really kick up at Clark Canyon during the summer months.  Scientists have concluded that significant wind events have created perfect storms (pun intended) in Clark Canyon, unnaturally stirring up and stratifying water columns, resulting in suspension and resuspension of sediment and diatoms with varying chemical and temperature profiles.  Put in technical speak, the shear stress imparted from the motion of the water likely causes increased turbidity in lower waters of the reservoir.   Water monitoring shows that turbidity events coincide primarily with isothermal temperatures and low water column stability, and oxygenation of the hypolimnion layer and mixing of the hypolimnion and epilimnion layers. 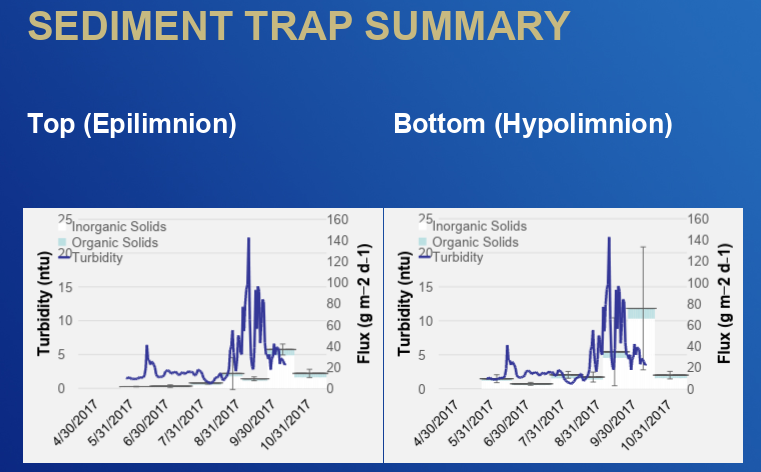 Expert scientists also clarified that Clark Canyon Reservoir is a sediment “sink,” meaning it does hold TSS and keeps it suspended in water columns.  Understanding the presence and distribution of TSS in Clark Canyon is critical to understanding how recent years’ reservoir destratification events have created the unfortunate pollution events downstream in the Beaverhead River.

By tracking wind events, TSS and temperature profiles in CC, and using acoustic doppler underwater to track and assess water column currents and mixing, scientists were able to track and predict with high certainty when and how mixing events and destratification of the entire reservoir would occur. 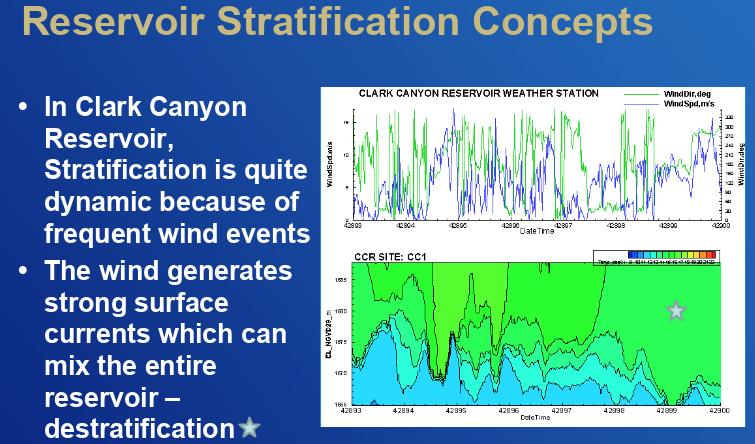 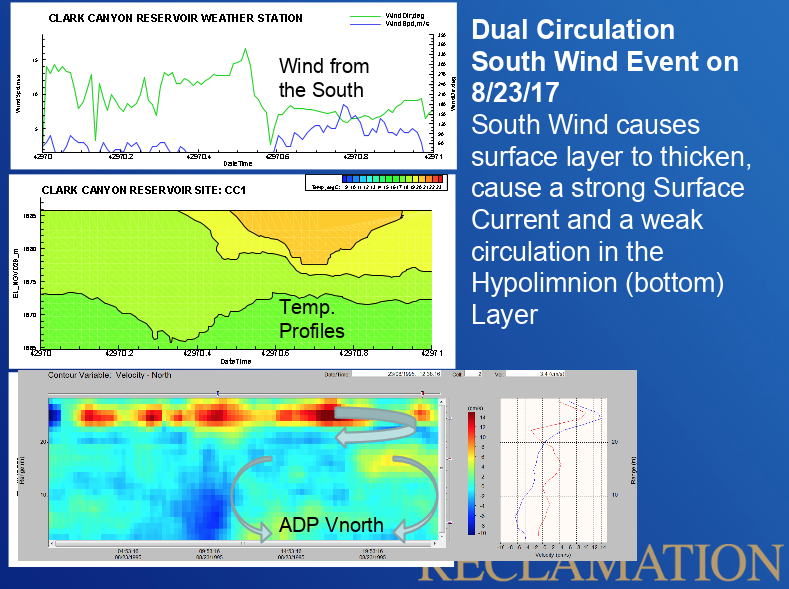 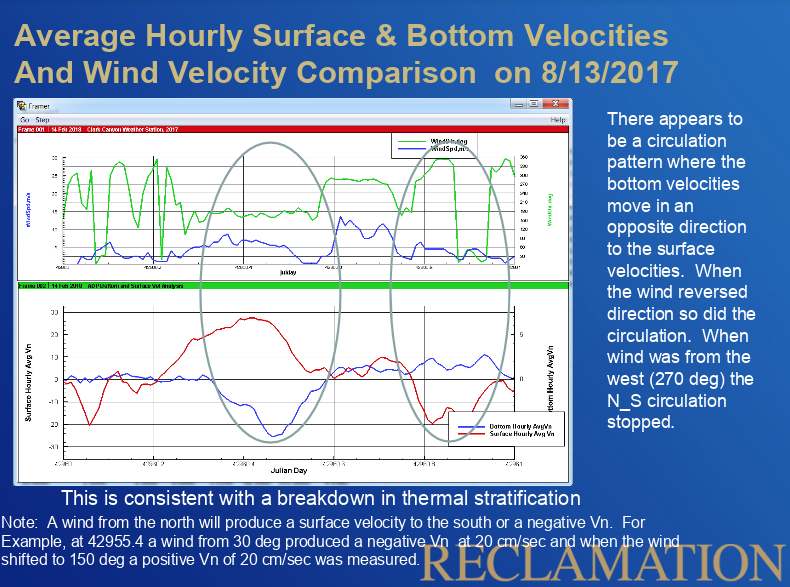 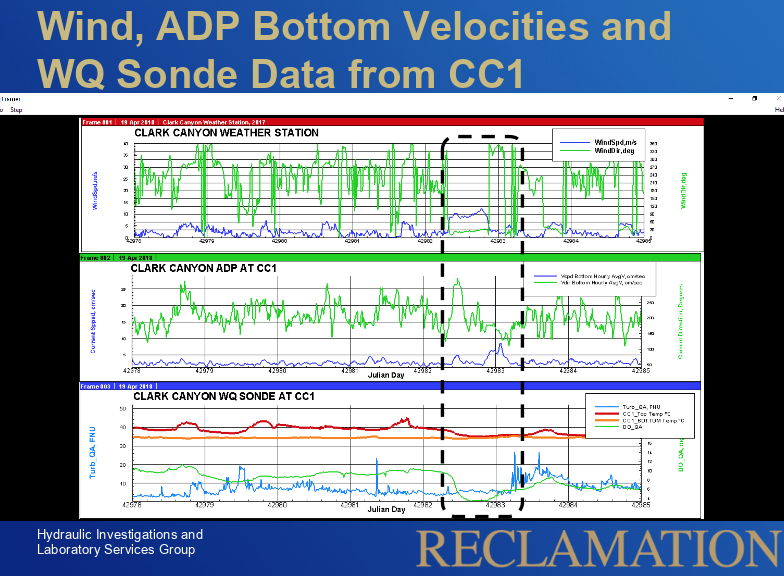 These serious destratification events are also the key times when nutrient-loving diatoms can be resuspended in ideal temperatures, resulting in algal blooms that are short-lived and, after blooming, would die re-creating more cloudiness in water columns.  If winds and temperatures stay in the “perfect storm” range and water columns flip (meaning the nasty pollution water column on top flips to the bottom) and is pushed up against the dam, the same pollution-bearing was water column on the bottom now discharges the same nasty mess into the Beaverhead River.

While expert scientists feel fairly confident in their hypotheses about the causes of Clark Canyon’s pollution events and, thus, where the Beaverhead’s water quality struggles come from, there is not a direct path forward to stopping these problems.  As an initial matter many causal agents – unique environmental conditions – are not under anyone’s control.  Conversely, the Bureau of Recl. does have direct control over infrastructural and management actions that could mitigate, if not completely stop, these pollution events.

For example, other reservoirs have used infrastructure additions to create what is commonly called a “selective outflow,” meaning a new outlet pipe is built into the dam so that operators can select which appropriate outlets to discharge water downstream based on evolving water chemistry.  Similarly, operational management options – such as keeping more water behind Clark Canyon Dam – have the potential to affect and mitigate large temperature gradients in the reservoir.  Without unnatural heating of shallower water (when reservoir is progressively drawn down each summer) it could be possible to prevent such dramatic temperature changes in the reservoir, meaning that even if large wind events mix water columns, the potential for full destratification and algal blooms becomes less.

Of note these potential solutions are hypotheses, and each requires significant technical study and, if implemented, significant funding to become a reality.  However without any action the status quo of nearly annual pollution events in the Beaverhead will continue, causing not only lost fishing opportunities and poor water quality – the lawful right of Montana citizens – but likewise significant harm to Dillon and many local businesses reliant on cool, clean river flows.  Upper Missouri Waterkeeper will continue to watchdog federal and state agency discussions and investigations of Beaverhead summer pollution events and hopes to collaborate with local stakeholders in a joint effort to raise political awareness that seems necessary to “moving the ball down the court” and designing, and implementing, meaningful river protection strategies for the Beaverhead.

Sadly, time is not the friend of the Beaverhead River and inaction will only prolong the unacceptable status quo.   The opportunity to protect and restore the Beaverhead is fleeting; Waterkeeper is dedicated to working with any and all stakeholders to ensure our decisionmakers and agencies take necessary steps to use all means necessary to protect the Beaverhead and the jobs, businesses, and fishery it supports.

Interested in learning more or talking about this issue with us?  Click here and send us a note!