Join the City of Great Falls in asking Gov. Bullock to order a cumulative impacts study of the diverse effects that the Madison Food Park Slaughterhouse will likely create. 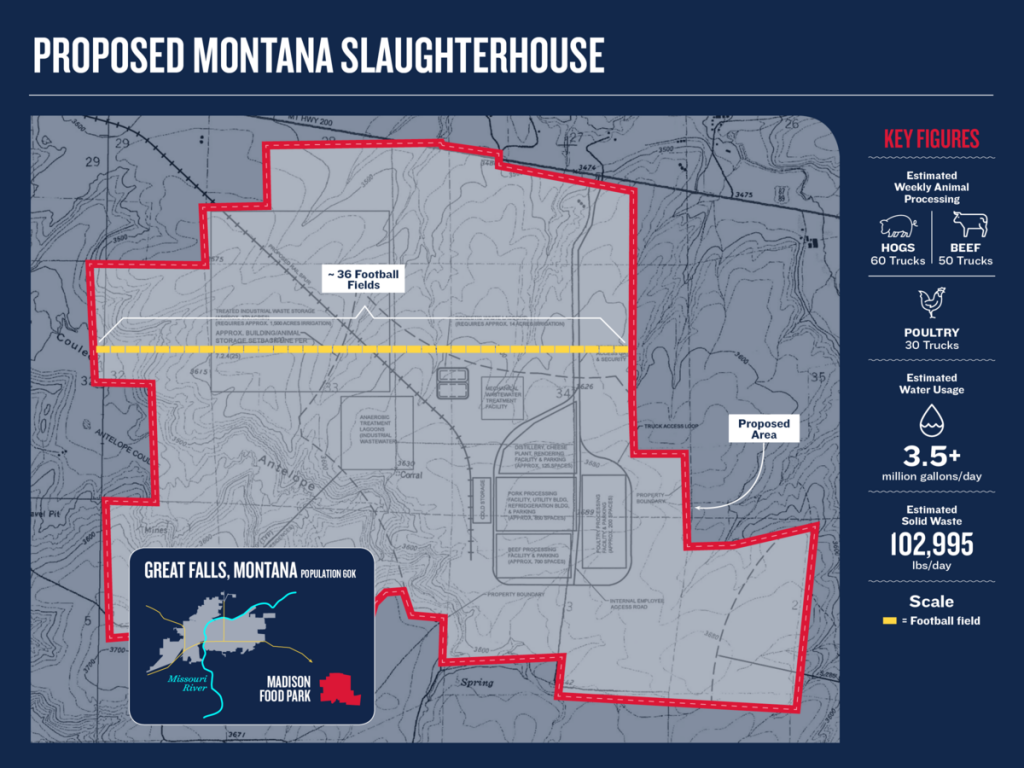 Local citizens fighting to stop the Madison Food Park slaughterhouse – which would be the largest multi-species slaughterhouse in the Pacific Northwest, unlike anything in Montana history – are circulating a petition to support the City of Great Falls’ spring 2020 request that Governor Bullock initiate a cumulative impacts study examining the diverse threats such an industrial-scale project would create in our state.

On March 3, 2020 the City of Great Falls unanimously approved a resolution asking Governor Bullock to order a coordinated “Environmental Impact Study” (EIS) of the impacts likely to arise from the proposed Madison Food Park Slaughterhouse.

The City of Great Falls’ Resolution notes, among other things, that the proposed Madison Food Park (MFP) Slaughterhouse is an industrial-scale facility unlike anything previously seen in Montana and is likely to incite significant direct, indirect, and cumulative effects on the region, including but not limited to:

From a geographic perspective the MFP Slaughterhouse would be the largest multi-species facility of its kind in the Northern Rockies, located just 8 miles SE of City limits and upstream of its drinking water source, the Missouri River.  With such a consequential proposal at stake the City of Great Falls is rightfully concerned by potential physical, biological, economic, cultural and aesthetic impacts on the region, and the sustainability of the community.

For these and other similar reasons City decisionmakers seek Governor Bullock and expert state agencies’ assistance in qualifying and quantifying the likely effects of the MFP Slaughterhouse Proposal before any commitments or authorizations are made allowing the Project to move forward – – a “Look Before You Leap” proposition.

Let Governor Bullock know you are concerned by the scale, significance, and many unanswered questions posed by the MFP Slaughterhouse and request our State support the City of Great Falls in protecting our communities, our landscapes and waterways, and the unique Montana values we all hold dear.