Horse Creek Hills (HCH) subdivision is a proposed 4-phase, 435 acre development sited in Broadwater County on the eastern shore and directly upstream from Canyon Ferry Lake and nearby Confederate Creek. The proposed site is a rural, predominantly agricultural landscape and borders private ranches, state and Bureau of Reclamation lands to the north, south, and west. 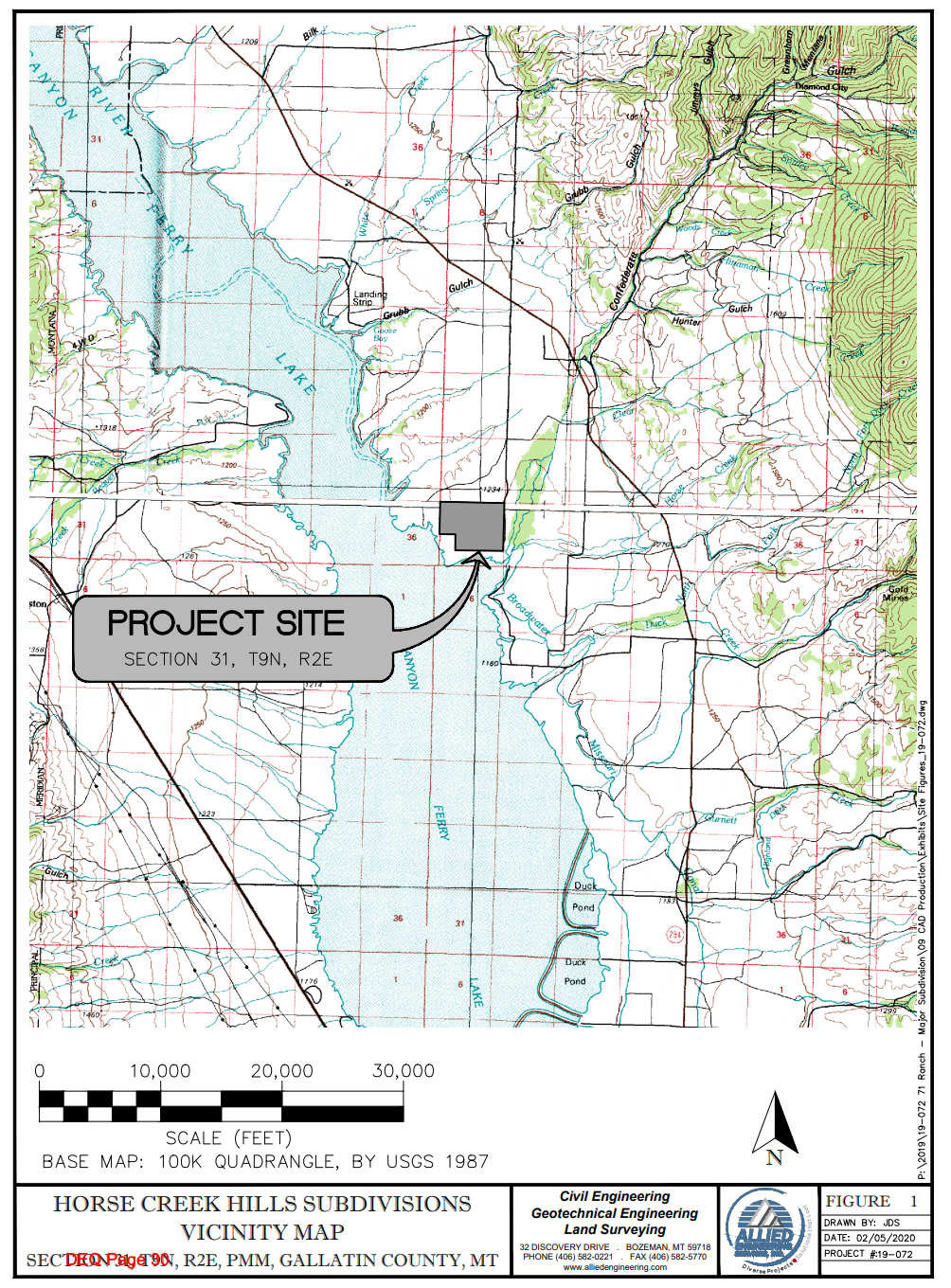 The Horse Creek Hills trophy home development includes four subdivisions with a total of 39 residential lots ranging from 6.4 – 16.6 acres, plus 2 commercial lots that are likely to become a gas station and convenience store (5.4-31.8 acres), and open space of 14.2 acres. The commercial lots are proposed to be accessed from Lower Confederate Road, and gravel roads are proposed to be developed to access the 39 residential lots.

The HCH subdivision and Broadwater County approval are riddled with issues.

In addition to the above concerns, and in a direct interest to Waterkeeper, the HCH subdivision and unlawful approval process raises the following big picture water issues:

HCH is situated in a “closed river basin” meaning there can be no new water rights issued subject to a very limited exception. At the same time recent Montana Supreme Court litigation in Clark Fork Coalition v Tubbs resulted in a clear directive that the Montana DNRC cannot allow aggregated “exempt wells” be used for new development projects because doing so subverts the Montana Water Use Act and is likely to lead to both violations of senior water rights and negative water supply impacts on the local environment. 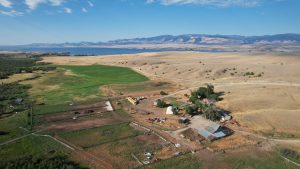 Applied to Horse Creek Hills, the DNRC approved 4x exempt groundwater wells for the entire subdivision, when the agencies’ rules only allow for one well. Equally bad is the developer’s application materials clearly show the intention to claim a 5th exempt well for its commercial gas station and convenience store, meaning the new subdivision would use 40x individual residential exempt wells plus 5x other exempt wells! The worst part of this scheme is that no agency, nor the County, is willing to hit the brakes and use science to understand how putting dozens of new straws into the local aquifer will affect neighboring properties, wildlife, and aquatic life.

Not only did the applicants circumvent the permitting process by proposing a phased approach combined with exemptions for each phase, they also provided skewed water use estimates that likely severely undercount real time water use. Whether it be estimated water use for irrigation and gardens, or residential consumption per household, the applicant’s proposed 10-ac/ft-yr per phase appears wildly insufficient based on a single family needing approximately 1 ac/ft-yr. Under DNRC and DEQ water consumption estimates phase 1 alone would require nearly 40 ac/ft-year.  Not taking a hard look at water supply is a BIG problem in Montana’s river valleys, particularly our arid regions where existing groundwater and streams are already over-allocated and depleted.

Separate from the Dept. of Natural Resources and Conservation’s unlawful approvals is Broadwater County’s failures under the Montana Subdivision and Platting Act.  The County has an independent legal obligation to identify and analyze potential impacts on a diversity of factors, including but not limited to the natural environment, existing water uses, wildlife, and more. The addition of 40+ new :exempt” wells drawing groundwater from the same aquifer is likely to create potentially severe impacts in this neighborhood.

Compounding the issue is the well-established fact that adjacent Confederate Creek is keynote habitat and spawning ground for rainbow trout.  Yet despite Montana Fish Wildlife and Parks submitting comments urging the County to understand the likely severe impacts on new exempt wells and water flows in the Creek, the County did nothing. Broadwater Conservation District’s streamflow monitoring data from July and August of 2021 show extremely limited streamflow with daily average flows less than 2 cfs; there’s literally no room for error to keep the creek and its fishery habitat alive.

On the flip side of the coin are water quality issues with new sprawl development.  The County has an independent responsibility under state law to assess the potential water quality impacts of 40+ new individual septic systems on Confederate Creek, and on nearby and downstream Canyon Ferry. Individual septic

systems such as those proposed for use are not designed to actively reduce nutrient loading to local water resources.  This is problematic as both Confederate Gulch and Canyon Ferry are legally impaired by nutrient pollution related to wastewater. See the DEQ’s 2020 Integrated Report and 303(d) List of Impaired Waters.

Best available science from the Montana DEQ indicates that the trigger level for potential negative nutrient pollution impacts on a downgradient surface water like Confederate Gulch begins at 0.3 mg/L nitrogen. Septic systems in HCH would each discharge waste concentrations approaching 5 mg/L nitrogen, more than 10x the concentration at which surface water quality becomes legally degraded and harmful algal blooms can occur. No one looked at the potential consequences of dozens of septics contaminating local drinking water sources either. Last, the County failed to consider how irrigation practices common to new trophy home lawns can create runoff full of herbicides and pesticides that can degrade local water quality. Sadly local decisionmakers pretty much ignored these considerations when they approved the HCH trophy homes subdivision.

Lastly, there was little meaningful assessment of how local surface water downgradient will be impacted by the project. Instead, the applicant relies on the arbitrary setback of 1,000’ to determine that any surface water impacts will be non-significant. However, there is no scientific support nor justification to show that nutrient pollution from septic wastewater magically becomes less severe or potent at 1,000 ft. The applicant also suggests that the volume of water in Canyon Ferry makes septic pollution from HCH inconsequential without scientific demonstration. It is likely, however, that new septic pollution discharges could exacerbate existing pollution trends in Confederate Gulch and Canyon Ferry Lake.

The Montana Subdivision and Platting Act requires Broadwater County to take a hard look at the HCH subdivision’s potential impacts on public health, local agricultural operations, water supply, water quality, and the environment. Although HCH has the potential to negatively impact agricultural water use, existing local wells, aquifer and groundwater connectivity and availability, fisheries habitat, and local water quality, the County has failed to adequately analyze such negative impacts. It is the County’s legal duty as the local government overseeing new development proposals to gather all available data and consider the impacts, and their failure to do so is a violation of the Subdivision and Platting Act.

So too the DNRC abused their discretion when exempting all wells in each phase of the major subdivision development, violating the Montana Water Use Act and Montana’s constitutional prohibition against the unreasonable depletion of natural resources.

Local government failed to analyze the cumulative impacts from septic groundwater discharges on the water quality in Confederate Creek and Canyon Ferry, two legally impaired waterways under the federal Clean Water Act and Montana’s 2020 Integrated Report. And similarly no one has conducted a surface water or cumulative impacts analysis to get a grasp on water pollution issues.

In sum, the Horse Creek Hills subdivision sets a terrible precedent of inadequate review based on unlawful phased development and the failure of our expert natural resource agencies to be good stewards of the public trust in clean water.

There’s broad community opposition to HCH subdivision in Broadwater County. Adjacent and nearby landowners that possess senior water rights and pursue agriculture for cattle and grain are concerned by the project’s impacts on their existing agricultural production, water quality degradation from new subdivision wastes, changes in road use and intensity, public safety and fire concerns, and impacts to native wildlife.  These folks, many of whom are Waterkeeper members, have stood up time and again to respectfully but firmly insist their local government do their job and adequately gather data and make informed decisions that protect their communities and backyards.

The Broadwater Conservation District shared similar concerns to the Broadwater County Commissioners and Planning Board including ground and surface water quantity concerns, water quality issues, the inadequacy of the project application, and the failure of decision-makers to protect and promote the health, safety, and general welfare of Montanans.

Upper Missouri Waterkeeper also submitted comments in opposition to the HCH subdivision preliminary plat application on behalf of our local members recommending the Planning Board deny the project.  Sadly, both local citizens and a diverse array of experts were ignored and the Broadwater Count Commission rubber-stamped the Horse Creek Hills major new subdivision in late July 2022.

Despite overwhelming opposition from local landowners, conservation organizations, and FWP, in early July 2022 Broadwater County approved the HCH subdivision without taking a hard look at water and land resource impacts under the Montana Subdivision and Platting Act, and the DNRC approved the developer’s reliance on exempt wells for the major new subdivision’s water supplies.

Upper Missouri Waterkeeper is working with local landowners and senior water rights holders to ensure Broadwater County and the DNRC adhere to state law, do the necessary reviews and analyses to protect the public good, and meaningfully address water security, pollution control, and responsible growth practices.